Springwind Immigration Consulting Services Inc. team is committed to providing the most genuine and honest immigration advice. We are committed to helping customers to study, work, and immigrate to Canada with plenty of resources and an experienced consultation team. We provide one-stop services which include after-arrival settlement services to help newcomers adapt to a new life in Canada.

Toronto is an international centre of business, finance, arts, and culture, and is recognized as one of the most multicultural and cosmopolitan cities in the world. It is the most populous city in Canada and the fourth most populous city in North America. The diverse population of Toronto reflects its current and historical role as an important destination for immigrants to Canada.

There are four diploma and degree granting colleges based in Toronto. These four colleges, Centennial College, George Brown College, Humber College, and Seneca College, operate several campuses throughout the city. The city is also home to a satellite campus of Collège Boréal, a French first language college.

If you came from downtown Toronto, you can take subway to Finch station, and then take Bus #39, and get off at Midland stop, you will be able to see our head office white building “First Professional Centre”. Springwind Immigration founder and our chief consultant Jenny calling downtown Toronto her first home in Canada when she immigrated here. She also studied in Ryerson University specializing in Immigration and Settlement Studies. Upon graduation from Ryerson University, she worked at South Riverdale Immigration Women Centre and Ralph Thornton Community Centre for newcomer integration program and community action project. She worked at YWCA Toronto downtown location as an Immigration and Refugee Counselor for ten years and was awarded as an outstanding worker for her service.

Springwind Immigration provides a wide range of immigration services to Toronto residents. Please contact us and we will help you in your immigration journey. 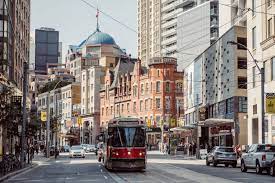 As a registered immigration company, we provide professional legal advice and assistance. You can put your trust in Springwind Immigration Consulting Services Inc.